Black churches tend to focus on empowering their congregants and communities to vote, while White Evangelical churches we tend to hear about resort to filling their people with fear.

In the Nov. 6 episode of “News With Nicola,” host Nicola A. Menzie takes a look at a news item related to Jamal Bryant, pastor of New Birth Missionary Church in Stonecrest, Georgia, and at the general issue of churches and pastors getting politically involved during election season.

This article serves as a transcript of the episode, which was produced as a 10-minute, in-depth video, which covers:

This transcript article may include additional information not featured in the video podcast, including direct links to sources and additional quotes.

As Premium Content, this “News With Nicola” episode transcript and its extended companion video are accessible to Faithfully Magazine Partner subscribers only for the first three days of publication.

Stop what you’re doing and watch this complete takedown of @HerschelWalker by pastor @jamalhbryant. #WeDontNeedAWalker pic.twitter.com/TOGnFxliLe

By now, you’ve seen the viral video of Bryant slamming the Republican Party and its Georgia Senate nominee Herschel Walker.

What you may not have seen were the remarks Bryant made after the clip of his Oct. 30 Sunday sermon went viral.

In an interview with The New York Times, Bryant questioned why critics always want to come for Black churches when their leaders do exactly what many White conservative Christian churches do all the time — that is, talk politics from the pulpit.

“White evangelicals have been very prominent as to who it is that they push and why. But when the Black church clears its throat, then we hear, ‘what is the demarcation between church and state?’” Bryant told the Times.

Bryant mentioned that because the Times itself brought up the question. — Was the Black pastor crossing the line and running afoul of the IRS rule barring churches and other nonprofits from campaigning for or against a politician?

How many times have we seen White Evangelical pastors standing in the pulpit or on the stage of their church making it abundantly clear who they’re voting for? And, in some cases, calling Democrats “demonic” and even suggesting that to not vote for the candidate of their choice means you’re a fake Christian?

It was an honor to be welcomed into The Potter’s House by Bishop T.D. Jakes. Thank you for having me at this morning’s service in Dallas. pic.twitter.com/DlM8sz40tQ

“Both of you need Jesus. Sadly, you didn’t meet Him in that ‘church’ yesterday,” wrote a user identified as a “Christian” and “Proud Texas Conservative.”

“In fairness, TD Jakes is no preacher of the Gospel. Beto didn’t go to a church. He visited a false teacher. Both of them are frauds. They deserve each other,” wrote another user who self-identified as a “Servant of Jesus” and “Pastor.”

And the icing on the cake came from Charlie Kirk, founder of Turning Point Faith and its many related political organizations:

“Let it be known to all in Christianity that T.D. Jakes proudly hosts the most radical abortion candidate imaginable in a place of worship. Heretic and fool,” Kirk, 29, tweeted to his 1.7 million followers.

“Heretic and fool.” This, from a Donald Trump sycophant, election denier, and documented liar. Kirk, who says he’s a Christian, is someone who routinely uses a church stage as a platform from which to spew lies, division, and poisonous propaganda. This is the same Charlie Kirk who said Christian rapper Lecrae should be banned from performing in churches because he performed at an event hosted by a Democratic candidate.

It’s not illegal, according to the IRS, for churches and other places of worship to welcome a politician’s visit.

But according to some White conservative Christians, Black churches are just not allowed to do this…especially when it’s a candidate that they don’t like.

Herschel Walker, who has been convincingly accused by at least one of two women that he pressured them into, and provided money for abortions, has been welcomed into several White Evangelical and presumably pro-life churches since the start of his campaign. He was even embraced at a closed-door prayer event at First Baptist Atlanta, a prominent megachurch that used to be led by the Rev. Charles Stanley, the day after it was reported that he hounded the mother of his unborn child to get an abortion (which she chose not to do).

As noted by Brian Kaylor, a Baptist minister and president of Word & Way:

And in March, he spoke at Sugar Hill Baptist Church, where he made controversial comments questioning evolution.

In each sanctuary, the pastors interviewed Walker on stage and offered their support for his candidacy in ways that appear to violate IRS rules prohibiting 501(c)3 tax-exempt nonprofits from engaging in partisan campaign activity.

These are churches led by White men who openly favor Republican candidates. Such churches have been doing this for years — and were even encouraged by former President Trump to flout the IRS rule against churches endorsing candidates.

According to a report published by ProPublica and the Texas Tribune, Black and White churches have been pushing the limits of this IRS rule for decades.

But consider these distinctions highlighted in the report:

While some Black churches have crossed the line into political endorsements, the long legacy of political activism in these churches stands in sharp contrast to white evangelical churches, where some pastors argue devout Christians must take control of government positions, said Robert Wuthnow, the former director of the Princeton University Center for the Study of Religion.

Wuthnow said long-standing voter outreach efforts inside Black churches, such as Souls to the Polls, which encourages voting on Sundays after church services, largely stay within the boundaries of the law.

“The Black church has been so keenly aware of its marginalized position,” Wuthnow said. “The Black church, historically, was the one place where Black people could mobilize, could organize, could feel that they had some power at the local level. The white evangelical church has power. It’s in office. It’s always had power.”

The article also notes that in the nearly 70 years of the Johnson Amendment’s existence, only two churches have ever lost their tax-exempt status for violating the law.

Why an Uncle Tom?

But back to Bryant’s sermon, in which he blasted Walker as a puppet of the White Republican establishment.

“They figured they would delude us by picking somebody who they thought would, in fact, represent us better with a football than with a degree in philosophy,” Bryant said in the video. “They thought we were so slow, that we were so stupid, that we would elect the lowest caricature of a stereotypical broken Black man as opposed to someone who is educated and erudite and focused.” 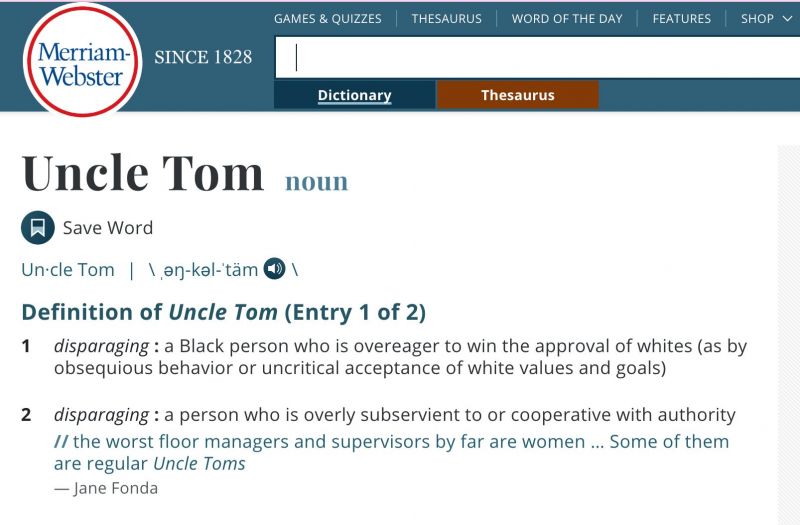 Bryant, implicitly giving pastor and senator Raphael Warnock a boost, all but called Walker an Uncle Tom. The term, inspired by the Harriet Beecher Stowe novel, reflects the opinion of some African Americans who see Walker as impeding Black social progress on behalf of MAGA interests. This is an unfortunate characterization that has followed Walker since his high school football days.

He’s seen as a Black man serving the predominantly White Republican Party’s agenda. An agenda that seeks to suppress things like Black voting rights and women’s reproductive decisions. And an agenda that embraces the violent, xenophobic, and white supremacist ideology of Christian nationalism.

Even The Associated Press reported how the Georgia Senate race between Walker and Warnock — who both appeal to their Christian faith — seems very much about Black church values versus White Evangelical interests.

According to the AP:

“Warnock, 53, preaches a kind of social justice Christianity that echoes King, the slain civil rights leader who also led Ebenezer Baptist Church in Atlanta. The senator embraces the Black church’s roots in chattel slavery and Jim Crow segregation. From the pulpit, he acknowledges institutional racism and calls for collective government action that addresses inequities and other social ills….”

“Walker talks, too, of society’s shortcomings, but the 60-year-old points to the expansion of LGBTQ rights, renewed focus on racism and ‘weak’ politicians, who, he says, ‘don’t love this country.’ He has called for a national ban on abortions….”

“It’s a culturally conservative pitch tied to individual morals rather than collective responsibility and effectively holds that the United States is a Christian country. That aligns Walker with the mostly white evangelical movement that has shaped the modern Republican Party.”

The midterm elections are on November 8 and about one-third of the 100 U.S. Senate seats are up for grabs. Each party desperately wants control of the Senate. Right now, Democrats have it (mostly thanks to Vice President Kamala Harris). But all Republicans reportedly need is at least one victory to take control.

Georgia, where Walker and Warnock are vying for voters, is among the swing states like Pennsylvania and Nevada that could help determine the Senate majority. So it’s no surprise that some pastors are hitting the pulpit with guns blazing.

But why question Black churches when they exercise the right to do exactly what White church leaders have been privileged and felt entitled to do for decades? And when you take the time to really look, Black churches tend to focus on empowering their congregants and communities to vote, while the White Evangelical churches we tend to hear about resort to filling their people with fear.

by Nicola A. Menzie
0

by Nicola A. Menzie
0