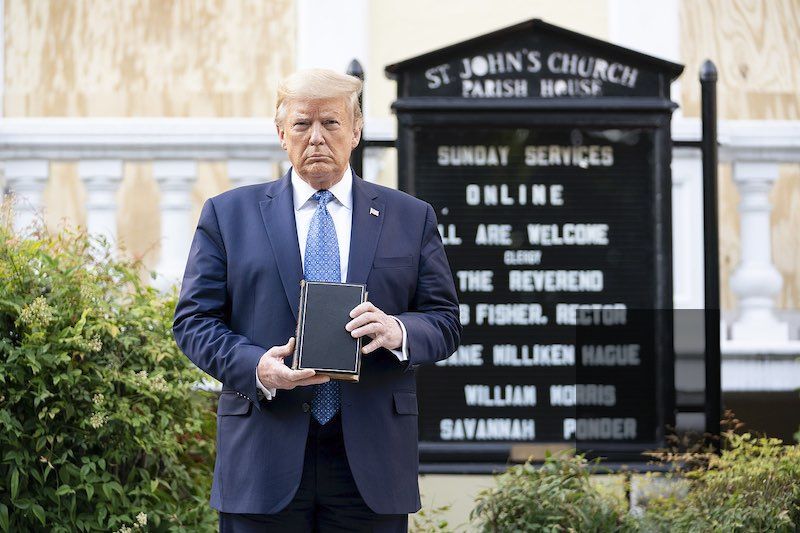 Student questions fill my inbox, each one bearing a brother’s or sister’s concern:

No student has sent me all these questions at once. Each student only asks a few. As I consider this pattern, I recognize a problem: My students don’t see that the issues these questions consider are interlocking pieces to a broader social puzzle. And if my students put the pieces together, they will see that a White man is leading a White man’s Party—and the White church.

In 2005, Ken Mehlman, head of the Republican National Committee, made the following admission to the NAACP:

“By the seventies and into the eighties and nineties Republicans gave up on winning the African American vote, looking the other way or trying to benefit politically from racial polarization. I am here today as the Republican chairman to tell you we were wrong.”

Lee Atwater—the political director of Reagan’s 1984 campaign, the manager of George Bush’s 1988 presidential campaign, and the eventual chair of the Republican National Committee—sheds light on the Republican Party’s strategic racism during a 1981 interview. According to Atwater:

You start out in 1954 by saying “N*****, n*****, n*****.” By 1968 you can’t say “n*****”—that hurts you. Backfires. So you say stuff like forced busing, states’ rights, and all that stuff. You’re going so abstract now, you’re talking about cutting taxes, and all these things you’re talking about are totally economic things and a byproduct of them is, [B]lacks get hurt worse than [W]hites. And subconsciously maybe that is part of it. I’m not saying that. But I’m saying that if it is getting that abstract, and that coded, that we are doing away with the racial problem one way or the other. You follow me—because obviously sitting around saying, “We want to cut taxes and we want to cut this,” is much more abstract than even the busing thing, and a hell of a lot more abstract than “N*****, n*****.” So anyway you look at it, race is coming on the back burner.”

Proverbs declares that God hates a lying tongue and a heart that devises wicked schemes; Atwater revels in both, flaunting how he spreads racial oppression to secure elections.

Atwater and Mehlman mask an important part of the Republican Party’s racist practices. They conceal that the party’s identity politics are also gendered.

Michael Steele, another chairman of the Republican National Committee, confessed that the Republican Party labored to be a White male party. As Steele shared in 2010: “for the last 40-plus years we had a ‘Southern Strategy’ that alienated many minority voters by focusing on the [W]hite male vote in the South.” The Republican leadership spent four decades designing to be the White male’s party. Polls and office holders show they succeeded.

Whereas Atwater reveled in Republican strategic racism, Mehlman and Steele apologized for it. None, of course, repented of their racist, gendered identity politics. Still, their different responses raise a question: Which response reflects the party’s actual commitments?

The answer is a person: President Donald J. Trump. We’ve seen that the Republican Party had a racist, gendered Southern Strategy before Trump. As Ta-Nehisi Coates writes, “Before Barack Obama, n****** could be manufactured out of Sister Souljahs, Willie Hortons, and Dusky Sallys.” But the Republican-establishment defenses of candidate and then President Trump answers our question. Again Coates:

[Donald] Trump arrived in the wake of something more potent—an entire n***** presidency with n***** health care, n***** climate accords, and n***** justice reform, all of which could be targeted for destruction or redemption, thus reifying the idea of being [W]hite. Trump truly is something new—the first president whose entire political existence hinges on the fact of a [B]lack president. And so it will not suffice to say that Trump is a [W]hite man like all the others who rose to become president. He must be called by his rightful honorific—America’s first [W]hite president.”

From his birtherism charges against President Obama, to his threats against “bad hombres,” to his bragging about getting away with sexual assault, candidate Trump signaled that he was going to be a White man’s president, dedicated to tapping into and drawing from the U.S.’s deep white nationalist roots and their accompanying sexism. Since ascending to office, he’s labored to establish Trumpism identity politics for White folks. And the Republican establishment has coddled his efforts, as Sen. McConnell’s four-year defense of President Trump makes clear.

President Trump and establishment Republicans like Sen. McConnell show no signs of ceasing their strategic gendered racism. Instead, they’re doubling down on it to keep their base. Yes, they’re cunning enough to place White women such as Sarah Huckabee Sanders and Kayleigh McEnany before reporters. But they know these women will pull all necessary stops to promulgate the Party’s racist, patriarchal agenda. Sanders relentlessly lied. McEnany tirelessly defends Trump while claiming “I know who I’m ultimately working for, and it’s the big guy upstairs.” Both, of course, found the likes of Vice President Mike Pence and U.S. Attorney Gen. Bill Barr on their left and right flanks.

The fact that Sanders, Kayleigh, Pence, and Barr have played central roles in President Trump’s administration points to a third facet of the Republican Southern Strategy: It relies upon the White church—the set of self-identifying Christians across denominations who think and act according to whitewashed versions of Christianity.

Back in 2008, Christian theologian J. Kameron Carter declared that, “The problem of whiteness [is] the core theological problem of our times.” Carter nestled this claim within a multi-disciplinary treatment of the historic and ongoing linkage of [W]hite supremacy, patriarchy, and Christianity. His former Duke Divinity school colleague Willie James Jennings did something similar in 2011—one year after Michael Steele’s confession. Yet neither Carter nor Jennings addressed the Republican Party’s strategic gendered racism.

Their pupil Alan Jacobs, however, gets close. In his 2019 essay “Evangelical Has Lost Its Meaning,” Jacobs traces the historic ties binding the majority of White Evangelicals to President Trump. Jacobs writes that since Reagan’s administration:

[U.S.] church leaders in almost all denominations became less interested in traditional Christian doctrines and more interested in what some scholars have come to call moralistic therapeutic deism, a larger and larger proportion of [W]hite evangelicals became what Pew Research calls “God-and-Country Believers.” These folks, almost all of whom are [W]hite, may not attend church often or at all, and they may not be interested in, or even aware of, the beliefs that have typically characterized evangelical Christians, but they know this much: They believe in God, and they believe in America, and they love Donald Trump because he speaks blunt Truth to culturally elite Power, and when asked by pollsters whether they are evangelicals, they say yes.

Self-identified Evangelical voters overwhelmingly voted for candidate Trump. Michael Gerson notes that President Trump “won four-fifths of the votes of [W]hite evangelical Christians. This was a higher level of support than either Ronald Reagan or George W. Bush, an outspoken Evangelical himself, ever received.” Since his election, self-identified Evangelicals have sustained their overwhelming support for President Trump. With numbers like this, it’s no wonder Jerry Falwell Jr. claims White Evangelicals “found their dream president,” while making Liberty University a bastion of Trumpism.

Putting the Pieces Together

Writing about oppression, Brazilian Christian Paulo Freire observes: “When people lack a critical understanding of their reality, apprehending it in fragments which they do not perceive as interacting constituent elements of the whole, they cannot truly know that reality.”

For those like my students who wonder why racist rhetoric flows from the U.S. Presidency after months of anti-racist protests; why members of the Republican establishment aren’t rebuking him; why White churches are settling for silence or symbolic change; why Christian publishers are again peddling racist essays; and why there are so many White males leading the Republican Party; I encourage you to reread Freire’s words.

Then remember that a White man is leading a White party—and the White church is promoting both. What you’re witnessing is a byproduct of the seventies, the latest manifestation of the deplorable linking of Christianity and male-exulting whiteness. This should make Christians think of Galatians: “Those people are zealous to win you over, but for no good. What they want is to alienate you from us, so that you may have zeal for them.” And, to riff on St. Paul, beware: You may become someone’s enemy if you tell the truth about the Republican Party’s strategic gendered racism. Christian or not, President Trump’s followers prefer their White lies.

Editor’s note: A version of this article first appeared on the author’s blog on July 7, 2020.

Dr. Nathan Luis Cartagena is an Assistant Professor of Philosophy at Wheaton College (IL), where he teaches courses on race, justice, and political philosophy. Cartagena also serves as the faculty advisor for Unidad Cristiana, a student group working to enhance Christian unity and celebrate Latina/o cultures. You can read his writings at nathancartagena.com, and follow him on Twitter @MeditarMestizo.