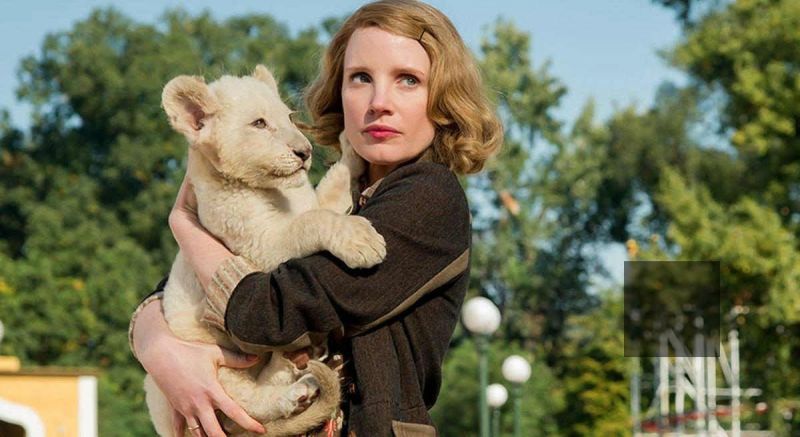 The Zookeeper’s Wife is, in some ways, “another Holocaust movie.” It is a standard cinematic effort to depict an ugly part of history some of us would rather like to forget—but that is precisely why it is a film worth seeing.

The Zookeeper’s Wife, based on Diane Ackerman’s 2007 nonfiction book of the same name, depicts how a Polish couple helped save 300 Jews from killer Nazis at the Warsaw Zoo during World War II. The English-language film, shot primarily in the Czech Republic, opens in an idyllic Garden of Eden-like setting in 1939, just days before Germans invade Poland, and concludes nearly seven years later after the war’s end.

Two-time Oscar nominee Jessica Chastain (Zero Dark 30, The Help) stars in the titular role as Antonina Zabinski, described by distributor Focus Features as “a real-life working wife and mother who became a hero to hundreds.” Zabinski’s husband, respected zoologist Jan Zabinski, is portrayed by Belgian actor Johan Heldenbergh (The Broken Circle Breakdown). The pair come across as steady, normal folks, passionate about caring for the many animals at the zoo—until the zoo is raided and their focus becomes saving the lives of Jewish neighbors shoved into Warsaw’s miserable ghetto. The Zabinskis and their young son (Timothy Radford and Ryszard Zabinski), each playing their part in the Resistance, hide Jews secreted from the ghetto for days, or even years in their villa’s basement and in subterranean tunnels that previously sheltered animals. Their bombed-out zoo operates as part of an underground railroad for escaped Jews, remarkably, right under the noses of Nazi soldiers.

‘Thor: Love and Thunder’ and Marvel’s Issues With God

Mothers with children and unrelated escapees sleep in cages down below during the day and join their hosts upstairs at night when Nazis leave the zoo grounds. Some viewers might find that their cave-like setting conjures up thoughts of Noah’s ark. As if living in primitive times, the Jewish refugees document their stories of defiance to persecution with colored pencils on the cavern walls. They draw stick figures, a wolf with a noose around its neck, and golden Stars of David everywhere.

What is curiously absent from The Zookeeper’s Wife, directed by Niki Caro, are any hints of the Zabinskis’ faith. They were Christians, as noted in Ackerman’s book but apparently omitted in Angela Workman’s script. While the Zabinskis’ personal religious devotions are ignored, they do participate in a significant Seder at the request of their guests, providing a genuinely poignant moment in the film.

All the necessary elements of a good movie are present in The Zookeeper’s Wife, but that is a bit of the problem. The heroes are winsome and generous, though understandably flawed. The villains are evil and idiotic with no redeeming qualities—though there is one SS official (Daniel Brühl) with a bit of feeling, directed at Mrs. Zabinski. There is even a young Jewish girl who resembles Anne Frank. However, the predictability of the plot (even if you have not read Ackerman’s book) does not stave off tears at tender moments—such as when Chastain manages (somewhat melodramatically) to save the life of a newborn elephant—or the discomfort wrought by seeing blood trail down the legs of a teen girl (Shira Haas) raped by Nazis. The Zookeeper’s Wife certainly makes you feel—anger, empathy, sadness, scorn. But it also leaves one wondering why a cinematic presentation about such a harrowing time is so flat, and pat, in some parts.

Worth noting, as is done at the conclusion of The Zookeeper’s Wife, is that the Zabinskis are among more than 6,700 Poles recognized by Yad Vashem, the World Holocaust Remembrance Center in Israel, as Righteous Among the Nations for using their privileged status as Gentiles and respected professionals to intercede on behalf of Jewish victims. More than 26,000 people from dozens of countries around the world have been acknowledged as Righteous Among the Nations, in many cases due to the testimonies of those who survived Adolf Hitler’s genocidal campaign.

Millions of Jewish men, women and children were killed as the Nazi government carried out Hitler’s evil “Final Solution.” Imagine the accounts of survival, and death, that remain untold. Who decides which tale among them is just “another Holocaust story?” What is more, how do you enjoy a Holocaust movie? As an elderly woman suggested after watching The Zookeeper’s Wife, “You can’t enjoy a movie like that. But it was worth watching and people need to learn about it.”

‘Thor: Love and Thunder’ and Marvel’s Issues With God