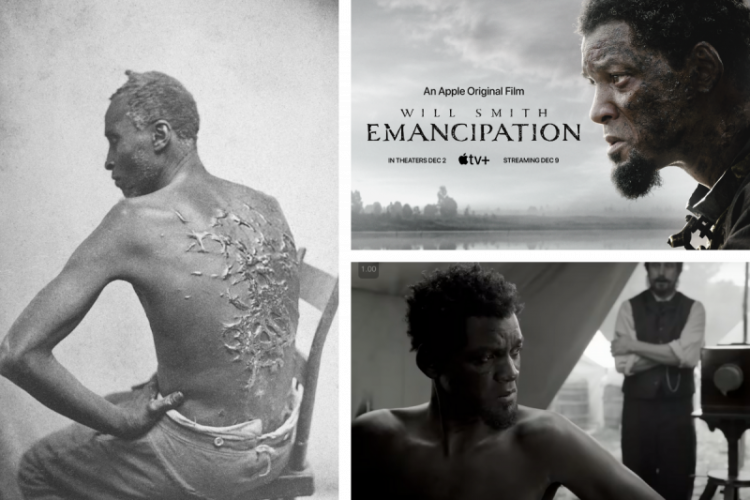 Will Smith stars as Peter in "Emancipation," an Apple Original Film inspired by Gordon, or "Whipped Peter," seen in this Mcpherson & Oliver photo taken in Baton Rouge, Louisiana, 1863. (Photo: Library of Congress)

Apple is moving ahead with its Will Smith-led project “Emancipation” after initially delaying the film due to the actor’s slap attack against Chris Rock at the Oscars in March.

“The slavery drama was broadly assumed to have been delayed in the wake of Smith’s assault on comedian Rock, which drew widespread condemnation and resulted in Smith being banned from attending the Academy Awards ceremony for 10 years,” the AFP reported.

However, Apple Original Films released a trailer for “Emancipation” on October 3, announcing that the Civil War slave narrative would indeed hit theaters December 2 before landing on its streaming platform a week later.

According to Apple: “Emancipation” tells the triumphant story of Peter, a man who escapes from slavery, relying on his wits, unwavering faith and deep love for his family to evade cold-blooded hunters and the unforgiving swamps of Louisiana on his quest for freedom.”

The dramatic two-minute trailer notably opens in color, with thick blood landing on broad green leaves. It then takes on sepia and black and white tones as it quickly cuts from scene to scene, laying out the basic premise of “Emancipation” via a voiceover from Smith’s character, a slave who is intent on reaching the Union Army.

At one point in the trailer, Smith seems to make up his mind about escaping bondage, saying, “I will not be afraid.” He says right after, “What can a mere man do to me” — which may bring to the minds of Christian viewers various Bible passages that use similar phrasing.

Smith’s character was inspired by “Whipped Peter,” a real-life Black man commonly referred to as Gordon. Gordon’s escape from a Southern plantation resulted in perhaps the most widely shared photo that exposes the brutality of U.S. slavery.

The photo was taken during a medical examination conducted by the Union Army on April 2, 1863, according to the Library of Congress. The shocking image reveals the deep scarring of Gordon’s back and the truth about the ugliness of slavery. Gordon said his disfigured flesh was the result of a brutal whipping by an overseer named Artayou Carrier. Gordon had been held in bondage reportedly along with 40 other Black Americans on the plantation of John Lyons, an Irish immigrant.

The photo, along with others, was first published by Harper’s Weekly as part of its special July Fourth issue that same year. It was a critical period for the Union Army, who had started drafting soldiers into the Civil War.

​​”The photographic team mass-produced and sold copies of Gordon’s portrait in the small and popular format of the time, known as the carte-de-visite. The image provoked an immediate response as copies circulated quickly and widely,” according to one museum curator.

As Apple notes of the image titled “The Scourged Back,” the photo “ultimately contributed to growing public opposition to slavery.” The photo of “Whipped Peter” reportedly also inspired other Black men to join the Union Army in its fight against the Confederate Army’s resistance to ending slavery.

“Emancipation” appears to take its story from the Harper’s Weekly feature on Gordon, some details of which have been challenged by historians as inaccurate. While the fine details of Gordon’s life and heroics as a soldier may be debatable, the reality of what he endured in the American chattel slavery system as evidenced by his disfigured back cannot be denied.